Home
News
Featured
How to train a Red Panda 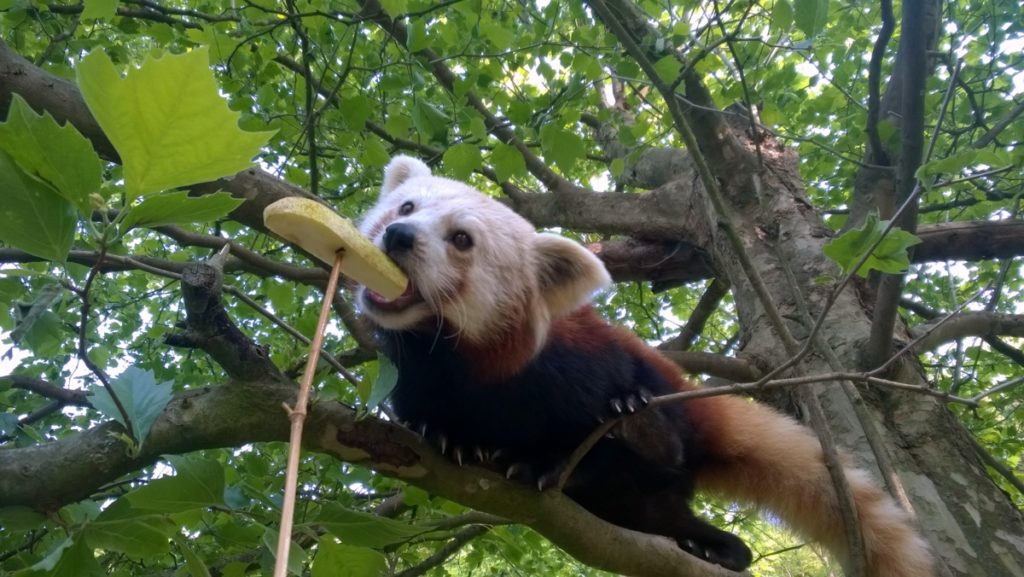 Red Pandas aren’t cuddly toys and can be quite shy. But if there is a medical examination necessary the veteranists have to look at the Red Pandas – and even have to touch them.

To be able to do this without an anesthetic, the zoos practice a special medical training with the Red Pandas. “It’s also a meaningful activity for the animals,” says Max Birkenhof from Neuwied Zoo in Germany. Every morning the 10-year-old female Red Panda Chima and the two-year-old Jacques do their exercises.

Zookeeper Jennifer Otte attracts the two Red Pandas with a small piece of pear or banana from the treetops down to the lower branches.

Zookeeper Jennifer Otte is responsible for the medical training of the Red Pandas at Neuwied Zoo.

Some fruit for the training.

And some very curious Red Pandas.

Finally, she gets her treat.

Once this is done, the piece of fruit is fixed on a long thin bamboo stick and held close to the animals. As soon as one of the pandas – mostly Jacques, his partner Chima is still very shy – touches the treat with his nose, a clicking sound is heard. A clicker, which is also used in training dogs, signaled that the Red Panda now can take the fruit.

Every morning the bamboo stick moves closer towards the Zookeeper. The goal is achieved when the Red Panda calmly eats in front of her and thereby can also be touched.