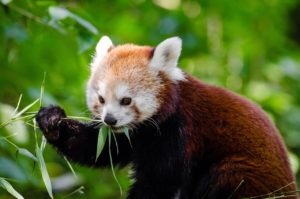 At least 45 Red Pandas have been found in Rara National Park in Nepal, the Kathmandu Post reports. The animals were spotted in four areas of the Rara National Park. National Trust of Nature Conservation and Red Panda Network supported the research.

In the Rolpa district locals found Red Pandas in a forest near to the village Gaam. One villager captured a Red Panda and brought it to the village. After an health examination the animal will be released to its habitat.